The House on Foreclosure Hill 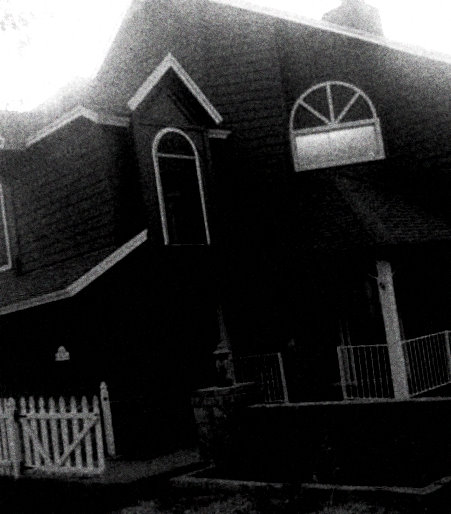 The wind whipped up and down Oak Street, depositing stray leaves at the feet of the group loitering in front of the last house at the top of the hill. The late October chill worked its way inside loose seams and under plastic masks as the motley assemblage of superheroes and ghouls faced each other in the pale glow of a streetlamp.

“I h-h-heard one kid snuck in the window and n-n-never came back out,” Peter said through chattering teeth.

Batman for the third year in a row, the caped crusader clung to the handle of a hollow, plastic pumpkin that held the evening’s haul. Despite nearly three hours of relentless trick or treating, it remained alarmingly light.

“Yeah, the P-P-Perkins kid,” Tommy gulped, makeshift Frankenstein bolts jutting out of his grey neck. “All t-they found was his b-bike.”

“And he was a sixth g-grader,” Cameron added. He carved a reverent six into the night sky with his green lightsaber.

Conversation ceased as all eyes focused on the overgrown Victorian. Rumored to have been the scene of untold horrors years ago, it sat vacant for as long as they could remember. Though none of the boys was eager to venture any closer, they were desperate. Striking out at nearly every other house on the block, the old Gribsby house was one of only two with an illuminated front porch on this All Hallow’s Eve.

But who turned on the lights?

“You go,” Peter directed Tommy, nudging him with an artificially-muscled arm.

“Because I’ve been up there before,” Peter countered.

“A couple years ago,” Peter lied, his face warming beneath his mask. “With some b-big kids. But if you’re too chicken, Cameron will do it.”

“Wrong, you are,” he said in his best Yoda voice. “Another Skywalker, you s-seek.”

Engrossed in negotiation, the three older boys didn’t hear her.

The gang had been unhappy to learn that their first unchaperoned Halloween came with the burden of babysitting Peter’s kid sister, and they had tried to ditch the Powerpuff Girl at every opportunity. Unable to shake their unwanted pink shadow, they had moved on to ignoring her.

Emily Sue broke from the pack and approached the house, her bright attire standing out in stark contrast to the dreary backdrop.

Neither of his friends flinched.

But she didn’t listen. The floor boards groaned as Emily Sue took a hesitant step onto the decrepit porch.

A dense tapestry of cobwebs clung to the gabled eaves and shimmered in the flickering light. She shuffled forward.

Each footfall scared more dust from its hiding place, stinging her eyes and tickling her nose.

She soon found herself standing before a monolithic oak door; its heavy, iron knocker well beyond her reach. Protected from the swirling wind beyond the porch, all sound disappeared save for her own shallow breathing. A glowing doorbell beckoned.

As she stretched towards it, the carriage light winked out, casting the house and Emily Sue into darkness.