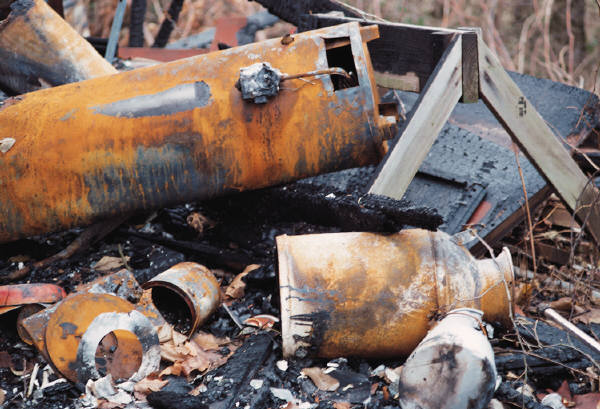 “I don’t recall the Pontiac being there.”

Sid Gustafson took in the back end of the forest green automobile that jutted out of the modest mid-century ranch. He had closed the purchase on the home mere hours earlier.

The car occupied the space in the living room’s exterior wall where a large picture window had formerly resided. Remnants from the surrounding brick littered the planter box below, dusting the remains of a lantana hedge in terracotta. Glass stalactites dangled precariously from the top of the demolished window, eager to avenge their fallen brethren.

His wife, Nancy, did not respond, but her sharp intake of breath confirmed that he was not alone in his recollection. Sid scanned the license plate that clung to the rear fender by one twisted screw.

“Warp speed,” he interpreted with a dry chuckle. He turned to Nancy, but she lifted a trembling finger to stifle the welling joke.  Grudgingly, he let it pass.

“So,” he tried again after a moment of tense silence. “Do you think this is a home or auto claim?”

“Now!” Nancy hissed, rounding on him with nostrils flared and murder in the cobalt eyes that lay coiled beneath tight curls of snow white hair.

The crisp autumn air carried on it the chemical smell of burned plastic. Sid was halfway convinced that the barrel fire blazing within his significant other, rather than the smoldering wreckage behind her, was responsible for it.

He removed his cell phone from the front pocket of his jeans, flipped it open, and dialed their real estate agent without further argument.

“Don’t tell me what to do,” Sid mumbled in practiced response to the automated voice that told him to enjoy the playback music before his party was reached. His Realtor’s genial answer came midway through the well-traveled chorus of Paradise City by Guns and Roses. Unfortunately, it was just his canned message assuring Sid of the importance of his call.

He braved a sideways glance at his wife. Somehow, she seemed to have swelled well beyond her sub five foot frame. Malice alone put her nearly eyeball to eyeball with Sid’s stooped six feet and two inches.

“Someone’s in my parking spot,” Sid finished. “Call me back.”

There was a sudden change to the ozone as everything stopped for a moment, a perfect, unnatural stillness cast over the world. Then Nancy exploded.

“Everything is funny to you, isn’t it,” she demanded. “Just one big running joke!”

Sid retracted from the verbal battering to come, an aged hand thick as an oven glove reflexively rising to ward off the blows.

“I didn’t think it was funny,” Nancy interrupted, her face a pleated crimson mask, “when you told everyone that I was just carb loading when I was six months pregnant with Isaac!”

The beginnings of a smile tugged at the corners of Sid’s mouth, but he beat it back before it could materialize into the death sentence it was sure to be.

“I didn’t think it was funny that time you interrupted my bridge group to ask if your speedo made you look fat.”

At this, Sid did smile. He laughed, in fact. A deep, bellowing laugh, unravaged by time, that had won Nancy over so many years ago.

“I didn’t think it was funny when you asked the bishop if he was a boxers or briefs man.”

A slight smile betrayed her, however. The angry maze of wrinkles began to disband, reestablishing itself along the deeper grooves of her laugh lines.

“I really don’t think it’s funny that there’s a car sticking out of our new house.”

Now, Helen was closing her eyes and shaking her head. Staying angry at her lovable goof of a husband was like cursing the tides. He was who he was. In truth, she was mad at herself. She was the de facto iron fist, responsible for steering their ship when Sid, the drunken captain, inevitably fell asleep at the wheel. It had been an unusually hectic week. Things that she would ordinarily never miss, got missed. And here they were.

“And I really, really don’t think it’s funny that you forgot about the final walkthrough that you promised to do before we signed the closing papers.”

Sid pulled her close and held her tight. Resigned, her breath came slow and steady against his chest.

“What are we going to do,” Nancy whispered.

Sid answered on the second ring, interrupting the vaguely robotic factory-programmed tone from 2006 that he had never bothered to reset.

“Hi Adam,” he responded without checking the caller ID. The only other person who ever called him at this number was standing next to him.

“About that home warranty policy the seller bought for us …”

“Does it include windows?”