Ever throw rocks at the ice cream man when you were a kid?

I have absolutely no idea why either.  Were we bored?  Most likely.  Did we suspect him of secretly poisoning the chocolate milkshakes?  Absolutely.  Of course, we also had it on good authority that the house at the end of the street was haunted, and that the Fairfields were running some form of illicit enterprise or another from their darkened living room.  The exact nature of what transpired behind those drawn curtains was a source of great debate, but the more outrageous the speculation, the more weight it held.   Bullies like Mike Fairfield, with their predatory eyes and facial spasms, didn’t just create themselves.  Our block was rife with the ready intrigue and danger demanded by the collective imagination of ten year old boys.

So it was one day that we decided it would be a good idea to hide behind the wall of the Carlson’s house and heave handfuls of gravel at the little white truck that played the Siren song of a modern day pied piper as it slowly made its way down North 80th Place.   What made this the day for the insurrection that had been welling ever since our parents started fretting about the dangers of tampered Halloween candy (and effectively spawning yet another ghost for us to chase)?  I honestly can’t say, other than we thought it would be funny.

The sounds of impact.  Music to a young boy’s ears.

Eventually, we stopped laughing.  The ice cream man didn’t come back the next week.  Or the week after that.  In fact,the ice cream man never came back.  Flash forward a quarter of a century.  My parents still live in that house on North 80th Place.  As McCormick Ranch has always been a haven for families, there is no shortage of kids in the neighborhood.  A new generation of receptive customers.  And still … no ice cream man.

I can’t help but wonder if my friends and I didn’t mess things up years ago for these kids today.  Is it possible that the ice cream man is simply fading into the sepia tones of yesteryear through no fault of our own?  Sure.  But is it also possible that the ice cream man is visiting other neighborhoods at this very instant – auspiciously avoiding the forever blacklisted site of the fated ambush?  Yes.

The temptation to yield to instant gratification is very real for us all. Our actions far outlast the immediate consequences, however. Those who would operate in the margins of ethical behavior to expedite the task at hand fail to account for the lasting repercussions that such short-sided tactics promise.  Ever slander a competitor?  Exploit confidential or inappropriately obtained information for leverage?  How about trying to separate a colleague from a few dollars worth of commission or an established client?  It’s self-defeating. Regardless of the immediate outcome, debasing oneself in such a manner is guaranteed to set off a chain of events that may not be fully realized for years to come.  Reputations and livelihoods are at stake, and not just our own. Often, our actions prove detrimental to those we will never even meet.

So when you reach one of those forks in the road, take a moment to think, lest you forfeit your spoon.

And don’t throw rocks at the ice cream man. 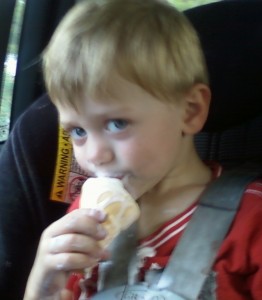